The global prevalence of autism has increased twentyfold to thirtyfold since the earliest epidemiologic studies were conducted in the late 1960s and early 1970s. Till about 20 years ago, autism was considered a rare neuro-developmental disorder with one in over 1,000 children being diagnosed with it. Not anymore. Recent data quoted the prevalence of autism at an alarming 1 in 68 children in March 2014.

It is estimated that close to 10 million people in India suffer from autism and related disorders. AIIMS has conducted several studies to know the reason behind this rapid increase but no conclusive evidence has been found. AIIMS doctors say while there are several treatment methods being experimented with, only behavioral interventions have proved successful in controlling symptoms such as impairment in eye-to-eye contact, facial expression, body posture and gestures which are displayed by those with autism.

Autism is a neurological disorder characterized by a combination of poor social, cognitive, communicative and adaptive skills. Typical problems include language impairment, repetitive behaviors, social problems, sleep and feeding disorders - noticeable between six months and two years generally. As of now there is no cure for autism but therapies can mitigate the symptoms to a large extent. It is estimated that somewhere between 3 to 25% of children may lose their autistic diagnosis over the years, mostly those who have enrolled in early intervention programs. Autism Spectrum Disorder [ASD] is perhaps the most complex controversial and neurological disorder because each person with autism is different from the other. A study has found that the brains of autistic children produce on an average 42% more information than non-autistic children when in resting state and this may explain why children with autism tend to withdraw into their own inner world and become socially detached. The theory suggests that autism is not a mental deficit but a mental overload and autistic children deal with this by trying to shut off the outside world. A recent study findings show that the brains of individual with autism display unique synchronization patterns in terms of both over and under – connectivity, between brain cells.

Autism is a spectrum of closely related disorders with a shared core of symptoms.  Autism spectrum disorders appear in infancy and early childhood, causing delays in many basic areas of development, such as learning to talk, play, and interact with others.

The signs and symptoms of autism vary widely, as do its effects. Some autistic children have only mild impairments, while others have more obstacles to overcome. Regression or loss of learned skills should be taken seriously as also social and behavioral manifestations. However, every child on the autism spectrum has problems, at least to some degree, in the following three areas:

There are different opinions among doctors, parents, and experts about what causes autism and how best to treat it, but also there is much that we still don’t know. There is one fact, however, that everyone agrees on: early and intensive intervention helps. For children at risk and children who show early signs, it can make all the difference. The quality of an attachment bond between caretakers and the child can be more challenging because of the autistic features. We need to allow an autistic child to lead the way in creating a secure attachment. Bonding securely, even though difficult, is worth the effort because it encourages optimal development in your child. Behavioural interventions under professional guidance from Psychologists, Speech Therapists, Occupational Therapists and Early Interventionists are the mainstay for treatment. 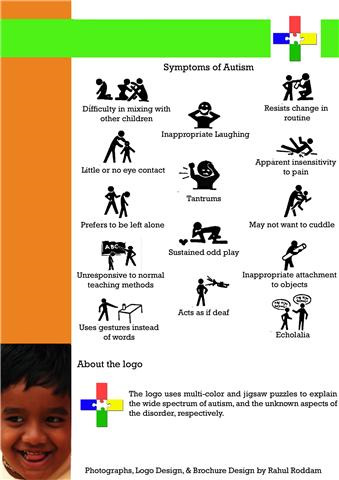 Resources for Parents on Autism: