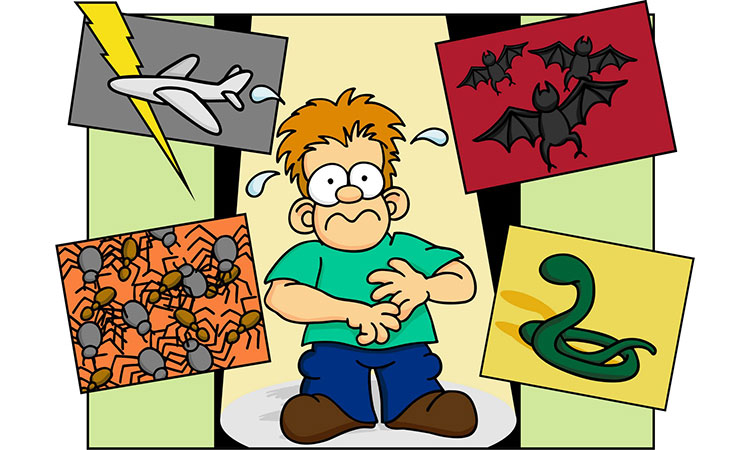 A phobia is a type of anxiety disorder, defined by a persistent and excessive fear of an object or situation. The phobia typically results in a rapid onset of fear and is present for more than six months.  The affected person goes to great lengths to avoid the situation or object, to a degree greater than the actual danger posed. If the feared object or situation cannot be avoided, the affected person experiences significant distress.


In some cases, these symptoms may escalate into a full-scale anxiety attack. As a consequence of these symptoms, some individuals begin to isolate themselves, leading to severe difficulties with functioning in daily life and with maintaining relationships. In some cases, the person may seek out medical care due to a constant concern with imagined illnesses or imminent death.

How Prevalent Are Phobias?

Phobias are quite common, with social phobia affecting about 7 percent of adults  in a given year and specific phobias affecting approximately 9 percent, according to the National Institute of Mental Health. In general, women are affected more than men.

There are a number of treatment approaches for phobias, and the effectiveness of each approach depends on the person and their type of phobia.


In exposure treatments, the person is strategically exposed to their feared object in order to help them overcome their fear. One type of exposure treatment is flooding, in which the patient is confronted by the feared object for an extended length of time without the opportunity to escape. The goal of this method is to help the individual face their fear and realize that the feared object will not harm them.  In systematic densitization the patient is exposed in a gradual manner to the feared object along with induced relaxation [a condition which is the antithesis of a phobia].  Another method often used in phobia treatment is counter-conditioning. In this method, the person is taught a new response to the feared object. Rather than panic in the face of the feared object or situation, the person learns how to cope with the situation.  This new behavior is incompatible with the previous panic response, so the phobic response gradually diminishes. Counter-conditioning is often used with people who are unable to handle exposure treatments. Cognitive behavioral therapy (CBT) can be beneficial by allowing the patient to challenge dysfunctional thoughts or beliefs by being mindful of their own feelings, with the aim that the patient will realize that his or her fear is irrational. CBT may be conducted in a group setting. Gradual desensitization treatment and CBT are often successful, provided the patient is willing to endure some discomfort.  Hypnotherapy can be used alone and in conjunction with systematic desensitization to treat phobias. Through hypnotherapy, the underlying cause of the phobia may be uncovered. The phobia may be caused by a past event that the patient does not remember, a phenomenon known as repression. The mind represses traumatic memories from the conscious mind until the person is ready to deal with them. Hypnotherapy may also eliminate the conditioned responses that occur during different situations. Patients are first placed into a hypnotic trance, an extremely relaxed state] in which the unconscious can be retrieved. This state makes patients more open to suggestion, which helps bring about desired change.  Finally, for people with extreme phobias, medication like a low dose of a benzodiazepine or potentially an antidepressant (like a selective serotonin reuptake inhibitor, or SSRI) in combination with cognitive-behavioral therapy can be very helpful.